Have you ever wondered why concussed football players insist that they “feel fine” and beg their coaches to let them back in the game? The answer is twofold, and rather surprisingly, it sheds considerable light on car crash head injuries.

The brain often conceals its own trauma injuries. Basically the same thing happens when the brain buries painful memories deep in the subconscious. So, when these players say the “feel fine,” they are not lying. Many times, they are quite literally feeling’ no pain.

Furthermore, injuries trigger adrenaline releases. This brain chemical is essentially a natural painkiller. Once it wears off, injured people experience the full, painful effect of their head injuries.

This same process occurs after car accidents, especially since today’s cars prevent many surface lacerations, particularly at low speeds. This video is a good illustration. But notice how much the 2015 crash dummy is tossed about during the simulated wreck. That motion, and not a laceration, is what causes the serious crash-related head injuries detailed below. 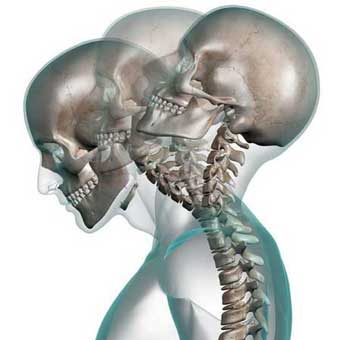 Even at a relatively low speed, the crash dummy’s head violently pounded into the airbag and then suddenly rolled back at a very awkward angle. At higher speeds, the effect is much worse. That sudden forward-and-backward motion almost always causes whiplash.

The good news is that this head injury is almost never life-threatening. But that’s about the only good news. The nerves in the lower neck, especially the cervical nerves, are highly susceptible to injury. There are no bones, and very few muscles, to protect them.

Additionally, whiplash is a soft-tissue injury. These kinds of wounds do not show up on X-rays and other common diagnostic tests. That does not mean these injuries are made up. It just means they are invisible to current medical technology.

Initial whiplash symptoms include serious headaches and some neck pain. Soon afterwards, the headaches become almost migraine-like and the pain radiates down the shoulders and into the arms and hands. Pain of that magnitude makes it almost impossible to function.

The bottom line is that whiplash is a serious injury which is almost always caused by car crashes and is difficult to diagnose. Those are three very good reasons to not just go to the doctor after a car crash regardless of how you feel. That doctor needs to be a professional who focuses on whiplash and other car crash injuries. Another doctor may simply tell you to take two and call me in the morning. That treatment may help you feel better for a while, but it does nothing to address the problem.

Let’s return to the football example mentioned above. Until recently, most doctors thought that violent hits caused most concussions. But the latest research indicates that less-severe hits may cause concussions as well. In fact, a player may have a concussion even if traditional symptoms, like partial loss of consciousness (having one’s “bell rung”) and vomiting, are absent.

Or, think about eggs. It’s possible to scramble an egg without breaking the shell. Your brain and your skull are the same way. The brain is basically liquid mass. When outside forces shake the skull, the brain smashes against the bone.

These symptoms, and others like them, make it difficult or impossible to function at work or home.

Concussions are mild traumatic brain injuries. Someday soon, doctors may be able to use stem cells and other advanced treatments to reverse brain injuries. But right now, these injuries are always permanent. Once brain cells die, they never regenerate.

Prolonged and targeted physical therapy can ease the symptoms. Again, this treatment should come from an experienced car crash medical professional. During brain injury physical therapy, progress is not always a straight upward line. It comes in fits and starts. So, knowing the right exercises is not enough. The therapist must also motivate the patient without resorting to obvious tricks or sounding like a cheerleader.

That’s not to diminish the importance of targeted physical therapy. This process is actually relational as opposed to physical. The therapist must understand the patient’s needs and goals.

Car crashes are very unsettling, to say the least. Things like flashbacks and heightened awareness are normal for at least the first few days. However, if these symptoms persist, make sure your car crash injury physician is aware of the situation. Long-term behavior is usually a symptom of Post Traumatic Stress Disorder.

Like whiplash and concussions, PTSD is a soft tissue injury. Nevertheless, it is a physical brain injury and not a “processing disorder.” The latest research clearly shows that exposure to extreme stress erodes the neocortex. That erosion upsets the delicate balance between the neocortex and amygdala, which is the part of the brain that controls emotional responses.

Think of the neocortex and amygdala as a rider and a rather wild horse. As long as the rider is strong, the horse stays under control. But if the rider gets weak, the horse may run out of control. That explains why PTSD victims suffer symptoms like:

As mentioned, it’s impossible to rebuild the neocortex. Once brain cells die, they are gone forever. But physical therapy can train other, non-injured parts of the brain to assume the lost functions. Nothing can replace even one neocortex cell, but a therapist knows how to bring the amygdala back under control.

This caliber of physical therapy is not cheap. But an experienced attorney can take on the insurance company and obtain needed financial compensation for victims. Your attorney works with your doctor to ensure that you keep receiving the treatment you need.

If you were in a serious car crash, you almost certainly sustained a serious head injury. We are here to help.